The Plasticity and Disease Group engages in clinical and translational neuroscience. We use cutting-edge techniques as Magnetic Resonance Spectroscopy (MRS), function Magnetic Resonance Imaging (fMRI), Transcranial Magnetic Stimulation (TMS) and transcranial direct current stimulation (tDCS) to improve diagnosis, treatment and rehabilitation of patients suffering from brain diseases as Stroke and Amyotrophic Lateral Sclerosis (ALS). Using advanced scanning and brain stimulation techniques, we are able to identify disturbances in the balance between excitatory and inhibitory brain activity, a balance that is essential to maintaining normal brain function. Disturbances in the balance can serve as a biomarker for earlier diagnosis and modulation of the balance by brain stimulation can be used as a possible treatment.

We have a good strong collaboration with clinicians within Neurology, Psychiatry, Neurophysiology, Neuroradiology and Neurorehabilitation and aim to have a strong clinical focus in our research.

REMAP will reduce the dependence of patients with motor impairment on home care. The aim is to develop and implement a robotic exoskeleton and a brain computer interface (BCI) to assist patients with the progressive neurodegenerative disease ALS. Via recordings of the patient’s brain activity by electroencephalography (EEG), the BCI can control the robotic exoskeleton, allowing the patient to perform arm and hand movements such as eating and handling various objects. Unlike prior devices developed for upper limb rehabilitation, our system will be small, flexible, and suited for use in the patient’s own home.

REMAP brings together state-of-the-art robotic technology, EEG-based BCI knowhow, neuroscientific expertise, industrial partners, and patients in developing and implementing a robotic arm/hand device that overcomes three shortcomings of current BCI controlled assistive devices: First, the device will identify the patients intent to move, rather than the patient having to learn how to generate brain signals as required by current BCIs to operate. Second, the device can adapt to the changes in brain signals that naturally occur with learning or disease progression, and thus cause the performance of other BGI solutions to deteriorate over time. Third, the BCI-robotic device can gradually increase support of motor activity via the exoskeleton as the ALS invariably loses muscle power. This will allow the patient to continue to move his or her upper limbs via brain signals, even after he or she has become completely paralyzed.

REMAP will not only empower ALS patients by allowing them to maintain some activities of daily living, but also improve current state-of-the-art BCI controlled robotic devices in ways that will benefit other patient groups.

The project is a collaboration between research groups at Aarhus University, Aarhus University Hospital, Aalborg University, the Swedish company Bioservo Technologies and The Danish Rehabilitation Center for Neuromuscular Diseases (RCFM) and is made possible by a donation of DKK 8 million from Innovation Fund Denmark. 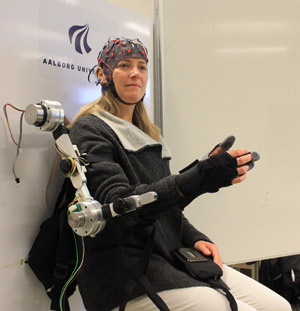 (Interview with Jakob Blicher starts 8:29 minutes into the program)

CFIN researchers Leif Østergaard and Jakob Blicher has been looking into late side effects from Covid-19 in a couple of studies. The Danish intenet media, Zetland, mentions these studies in a new article.

Read more (in Danish) in the Zetland article here:

A new Danish study published in the scientific journal Stroke shows that a small current to the brain - so-called transcranial direct current stimulation (tDCS) - may, in connection with physical training, help patients recover after their stroke.

"We have seen a surprisingly good effect in combining ordinary physical rehabilitation training with 30 minutes of tDCS every day. The effect of this combination is significant and can be relevant in future stroke treatment", says Jakob Blicher, associate professor at Center of Functionally Integrative Neuroscience (CFIN) at Aarhus University/Aarhus University Hospital. He is one of the researchers behind the new study.

Read more about the new study at Videnskab.dk (in Danish)

Approximately 25,000 people receive a concussion in Denmark each year. Of these people, up to 22% experience persistent symptoms due to the concussion. For this reason it is important to understand the processes that underlie these symptoms. The correlation between the degree of physical impact to the brain and symptoms experienced due to this impact is still unclear.

In a recently completed PhD project, Erhard Trillingsgaard Næss-Schmidt used a standardized way and a newly developed MRI scan method to investigate the middle part of the brain, and showed microstructural changes immediately after concussion. No obvious microstructural changes or strong associations between changes in the middle part of the brain with persistent symptoms were observed 2-5 months after the concussion. These results demonstrate the complexity of concussion which may require an expanded scope incorporating physical, psychological and social factors examined in connection with the persistent symptoms.

The project involves 72 subjects with concussion of which 27 were examined within 14 days and all subjects 2-5 months after the concussion. Twenty-seven healthy subjects without concussion were also assessed.