The Applied Imaging and Modelling (AIM) group engages in interdisciplinary collaborations within neuroimaging research using various acquisition modalities, primarily MRI. Our focus is on image processing, statistical modelling, and prediction. The AIM group is involved in a number of projects with internal and external partners, ranging from optimizing cortical thickness measurements in monkeys, over characterizing abnormal brain structure in psychiatric disorders, to measuring changes in cerebral perfusion in Alzheimer’s disease (AD).

We collaborate closely with the Functional Hemodynamics Group and the Neurophysics Group to apply novel theoretical models in the search for and validation of new imaging biomarkers.

One of the major focus areas in the AIM group is Alzheimer’s disease (AD), and during the last couple of years the group has delved deeper into the microvascular hemodynamic properties of the Alzheimer brain.

In a clinical cohort consisting of AD patients and patients with mild cognitive impairment (MCI) we found increased capillary transit time heterogeneity compared to age-matched controls in neocortex. Our model of oxygen delivery showed disturbed oxygen extraction capacity caused by the observed hemodynamic changes in the microvasculature. In addition, our measurements of capillary dysfunction correlated with cognitive symptoms and amount of white matter hyperintensities – a measure of small vessel disease (see figure 1).
The findings were published in Neurobiology of Aging (Eskildsen et al., 2017). 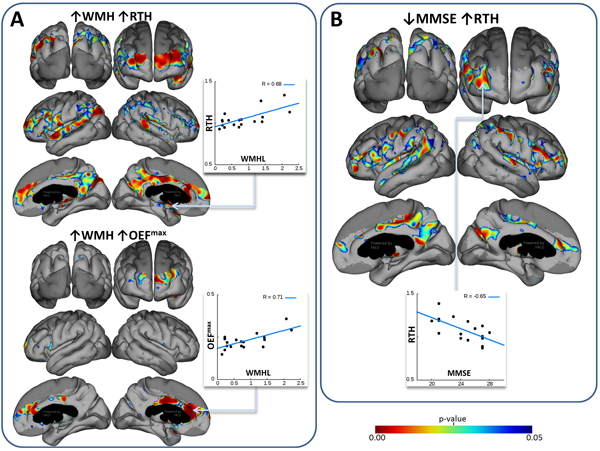 In a second cohort consisting of 23 AD patients scanned twice at 6 months interval, we found that longitudinal changes in our marker of capillary dysfunction, the relative capillary transit time heterogeneity (RTH), correlated with changes in cognitive function (see figure 2A). Modelling the tissue oxygen tension, which may indicate current or imminent tissue hypoxia, we found widespread correlation with cognitive decline throughout neocortex at baseline (see figure 2B).

In neuroimaging, the disease effects we are looking for are often subtle and transient. We continuously push the limits for what we can detect in the living brain using ever more sophisticated machinery, optics, chemical tracers and data processing. Often the effects we are looking for are confined to specific brain regions, be that of anatomical or functional definition. We rely on automatic processing tools to provide us with these regions, and usually without questioning their accuracy or the impact on our measurements.

In a PhD study looking for very subtle changes in brain tissue structure of individuals who suffered a concussion, Dr. Erhard Næss-Schmidt investigated the impact of using automatic processing tools for the analysis of tissue integrity metrics from MRI diffusion tensor imaging (Naess-Schmidt et al., 2016). He showed that group average segmentation volumes can vary up to 40% using conventional tools, such as SPM, FSL and Freesurfer (see figure). This variation resulted in differences of diffusion measurements of up to 10% on average compared to gold standard manual segmentation in healthy volunteers. Such variation may conceal important pathological phenomena and impair the sensitivity of imaging biomarkers. However, Dr. Næss-Schmidt also showed that the variation may be considerably lowered by applying more recent segmentation methods (Coupe et al., 2012) resulting in volumes and diffusion measurements similar to those obtained from manual segmentations. Applying these recent methods, he continued to measure tissue microstructural changes in the brain caused by concussion also known as mild traumatic brain injury (Næss-Schmidt et al., 2016). 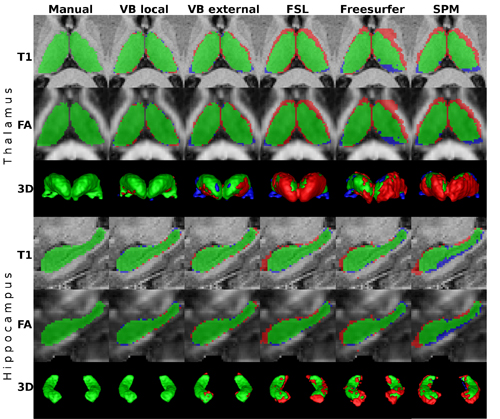 Applying the fast diffusional kurtosis imaging developed at CFIN (Hansen et al., 2013), we demonstrated significant age related changes in mean kurtosis of cocaine addicts in striatum and thalamus that are opposite to those seen in normal brain aging. This decrease in mean kurtosis may reflect loss of neurites, leading to fewer cell connections, decreased tissue integrity and increased extra-cellular space associated with cocaine addiction.