Capillary blood flow regulation is extremely important for the optimal function of organs especially in conditions where the oxygen supply is inadequate e.g. during ischemia. Therefore, it is of great interests to understand how capillary blood flow is regulated and possibly uncover ways to control or optimize capillary blood flow during periods of insufficient oxygen availability.

An important cell surrounding the brain capillaries are the pericyte, that can contract and thereby control the flow of red blood cells. These cells, that for long was categorized as uninteresting support cells, is now thought to play an important role in the control of capillary blood flow, blood brain barrier tightness as well as in angiogenesis.

Extra cellular vesicles (EVs) are released in the blood by a wide array of cell types. These vesicles have the potential to function as long distance signaling systems carrying messages that can impact the function of the recipient cells. An interesting group of molecules with the potential of re-programming the receiving cell is microRNAs (miRNAs). These short non-coding RNAs controls and modulates the translation of a large fraction of proteins and changes in the miRNAs will therefore have an impact on the expression profile of the cell and thereby their function.

The main goals of the project include:

Identification of the mechanisms by which RIC and BFRE evoke remote organ protection will, potentially, lead to future therapeutics using naturally secreted EVs as a drug delivery system in personalized treatment. This interdisciplinary program offers an ideal synergy to achieve the proposed objectives. 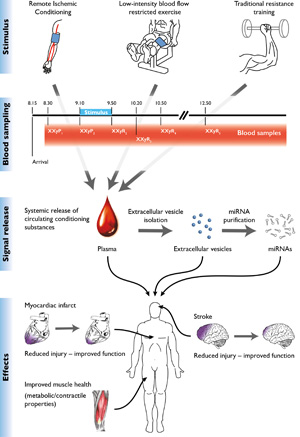 The transport of molecules to the brain is tightly controlled by the blood brain barrier (BBB), that consists of endothelial cells lining the blood vessels, pericytes, and astrocytes. The pericyte was long thought of as a non-functional support cell, but has received increasing attention during the last years as they are found to have contractile properties. It appears that the pericyte not only play a role in the BBB but also controls the flow of red blood cells in the capillaries thereby having a large impact on oxygen availability to the brain. In addition, pericytes play a central role together with endothelial cells in angiogenesis. Manipulation of pericytes in the brain could be key to controlling capillary transit-time heterogeneity (CTH) ultimately resulting in optimizing oxygen availability.

Using in vitro and in vivo methods, pericyte function and survival after ischemia is studied as well as their response to conditioning and other promising ischemia-protective treatments. This includes testing extracellular vesicles isolated from blood and miRNAs that are found differentially expressed after conditioning and/or training.

The Neuroscience and Cognition sub-theme (part of Life Science) is headed by CFIN as well as the Master’s programme in Neuroscience and Neuroimaging. Furthermore, several CFIN researchers are involved in the education as teachers and supervisors while an increasing number is building research collaborations.